We rose to another glorious day and slowly packed our things; we were reluctant to leave but Fossmark was beckoning so after eating breakfast and stowing the final things we set off. The first job of the day was to regain the path, so we had to get off the spur which meant finding our way across and over the various streams that drained the area. These negotiated, the path climbed steadily to about 800 metres before dropping into the top of an east-west running valley that led via a series of rocky outcrops down to Kvernavatnet lake and then on to Skåpet hytte. There was evidence of old rock workings here; we followed an old path made up of large boulders at one stage.

Skåpet marked the beginning of the Vindalen valley and as we walked past the hut and descended, the valley became considerably greener. Soon we were walking beside the gurgling river amongst tall trees and lush grass. This was a delightful section and as lunchtime was now beckoning we took the opportunity to paddle our feet in the river, and dine at leisure.

Shouldering our packs again it was time to leave the valley and start the climb up and over to Fossmark. We found the branch in the footpath and very soon were clambering up with a roaring stream to our left. The path was tricky in places but nothing serious. Care is needed to ensure you keep your eye on the path however. The red Ts were still in evidence and they took us round the back of a rocky outcrop presumably to avoid the lake ahead. The path had great views down into the Vindlalen valley but was a little exposed in places – again nothing too nasty.

As we worked our way round to the lake’s edge, the Ts indicted we followed the water’s edge for a while before sending us up the rocky slab. It was here we lost the Ts for the first time in the whole walk. We had the map and knew where we were but the Ts had led us high and then abandoned us! After a bit of searching and a bit more bum sliding we got down to lake level again and then had to find the path that would then take us out of this valley into the next. We ended up following the stream that fed the lake, jumping from boulder to boulder until we found the path again.

This took us up a small dry valley and then up and high above another small lake (Uravatnet). Here the path became rather tricky and in places required considerable concentration as we had a steep drops beneath us. It didn’t get as bad as the Wall of Death on day one but we did wonder how we’d feel about it if we’d met it at the beginning of our walk and not towards the end.

Once past this short section we came out above the appropriately named Rundavatnet (it was round). On the far side we could see a level track which was our target but the path took us on a fairly long detour before we finally made the track. By this time it was around 16.30 and we decided we would find somewhere to put up the tent. The track continued downhill in a wide arc but we didn’t find anywhere suitable for the tent so we continued on as planned to Fossmark and arrived at around 18.00.

At Fossmark there has been some work done on the river for water collection. A gauging station had been built and a small dam across the river had backed the river up. To get to the campsite, according to the map, meant taking the steel bridge and then making our way over a pretty marshy section to the lovely short grassy area by the pumping station. We were tired by this stage and hungry but as we had plenty of daylight left we decided to cook our first tea (we were near the end and had food to spare so decided to treat ourselves to two teas!). Out came the stove, off came the boots and we sat back waiting to eat.

We looked round to see a Norwegian couple out on their evening stroll. “But it says it’s a campsite on the map,” I countered.

“The map is wrong,” came the brusque reply. “You can camp outside the fence.” by which she meant as far away from their idyllic spot as possible.

“Thank You,” we called to which came the rather ironic call of “You’re welcome”.  No we weren’t!

We finished our dinner and then surveyed the area. By walking twenty metres away from the river, we were the other side of the fence and could camp ‘legally’. We moved our kit, erected the tent and cooked dinner number two. We were puzzled. The fence served no purpose other than keeping the sheep away.  What difference our tent would have made was not clear. We did go and make sure the couple saw us later on as we stood looking down on their holiday house. Not very welcoming!

As the sun sank below the horizon we took stock of our progress and debated what we’d do tomorrow. As it turned out matters were decided for us and we took the quickest route out. 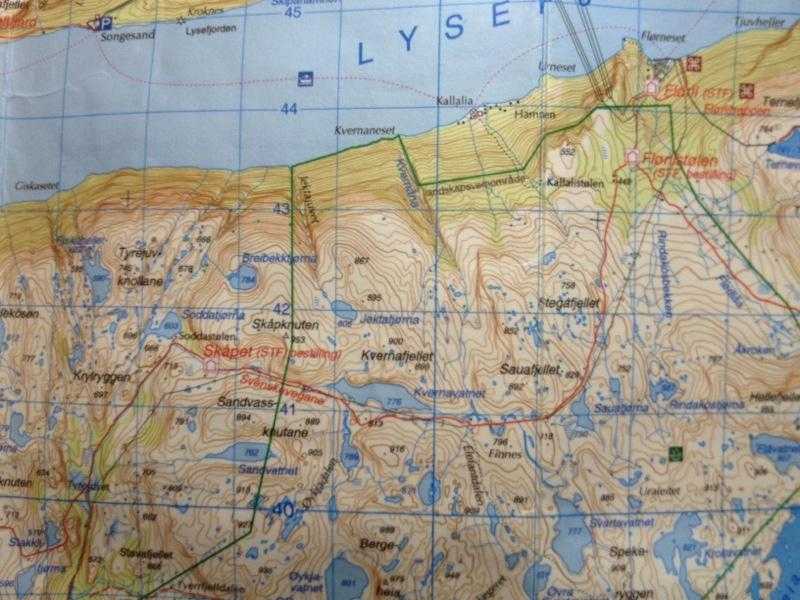