The route is a straightforward uphill walk following the well-made path that is followed by hundreds of Preikestolen walkers every day.  It’s unlikely to be a quiet walk!  The path goes through a series of steep sections interspersed by gentler flatter bits. The steeper sections are usually stepped.  The last three-quarters of an hour is done at altitude and cross a relatively level section, passing two large ponds and a huge ice-worn slab before the path edges around the cliffside and onto Preikestolen itself.  Here you’ll be able to edge nervously to the sheer drop above the Fjord 640metres below or dance frivolously!

In poor weather, which is what we had the first time, the idyllic much-published picture of the rock is very different.  In fact, the whole walk is very different.  Our first attempt was during a raging thunderstorm and as we headed up, scores of ill-equipped walkers streamed down the path, barely noticing us or recognising we had large rucksacks on.  On more than one occasion as you were stepping over a puddle to a small rock, a foot would land on it first and a damp body would push past. Don’t expect the usual British etiquette here! No polite “hellos” or”you-firsts”.

The Preikestolen rock itself, in the rain, is interesting.  A strong wind blew the newly formed streams back up over the edge in impressive up falls or water-ups! Torrents of water poured down the short flight of wooden steps at one stage and what had been a small stream on the way out had transformed into a deep, wide and fast-flowing river.  The lesson… extreme caution should be taken in poor weather.  Assuming you’re backpacking with the proper equipment, then you should be relatively OK but beware of the danger of lightning and avoid sheltering under rocks during storms… spark gaps are deadly.

We did the up and down walk again a few days later as we felt we had unfinished business there.  The sun was shining and it was warm. In great weather it’s a glorious walk!

For those that don’t wish to join the crowds on the rock itself, take the hill path instead of the cliff path, whose junction is just after you pass the two ponds – a small signpost points the way.  This fabulous climb has some stunning views back towards Stavanger and up the fjord and takes you to a spot overlooking the rock.  It is, with extreme care, possible to get down from this point to the Rock itself.  We chose not to and it looked easier to come up to this point than go down – just depends on how good you are with heights.

We started the walk at midday from the car park and arrived at Preikestolen at 1400.  The descent when we did it the second time, took about 1 hour 45 minutes but speeds will vary depending on your fitness and the number of other walkers on the path!

There are a few spots around the ponds where it is possible to put up a tent and the ponds themselves were being used for swimming when we went the second time.  There will be other spots on the tops as well.  Our original intention was to walk up to Preikestolen with the crowds, find a spot to put up the tent and then go back in the early morning to enjoy the place to ourselves.

That was our intention.  However the storm put paid to that. Despite being in waterproof tops, we were soaked and as it was two in the afternoon, we made the decision to head to Bakken hut 9 kilometres away.  Nine Kilometres, two maybe three hours away!  No dear reader it isn’t. Click here to read about how we combined day one and day two into a very long and gruelling one day walk.
Previous
Next 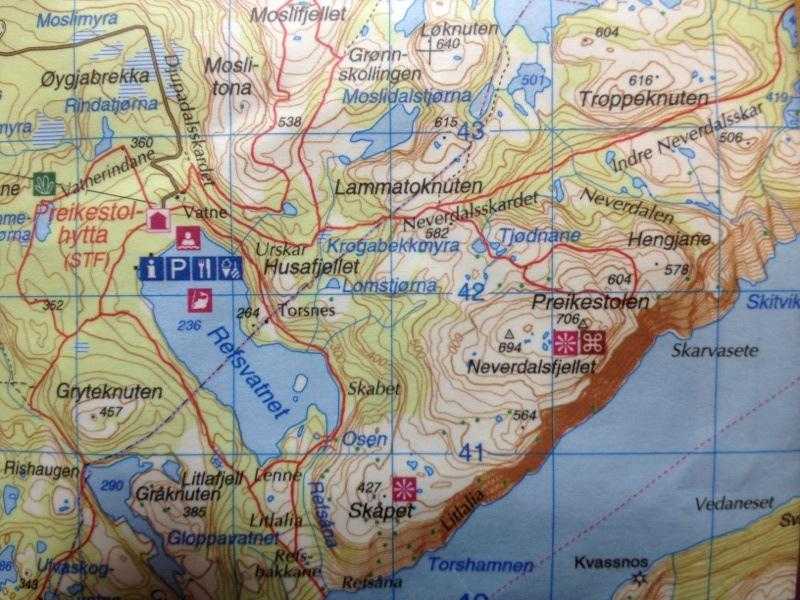